Upgrading Openstack from Newton to Ocata with TripleO

During the last cycle I’ve been working on testing upgrades from Newton to Ocata and in this post I’ll describe how the upgrade process looks like and share some tips which might be helpful when you’re upgrading.

We’re going to start with a composable roles RDO deployment including:

I’m going to describe below the overall upgrade steps and later we’ll go through the details and commands that are required for implementation. 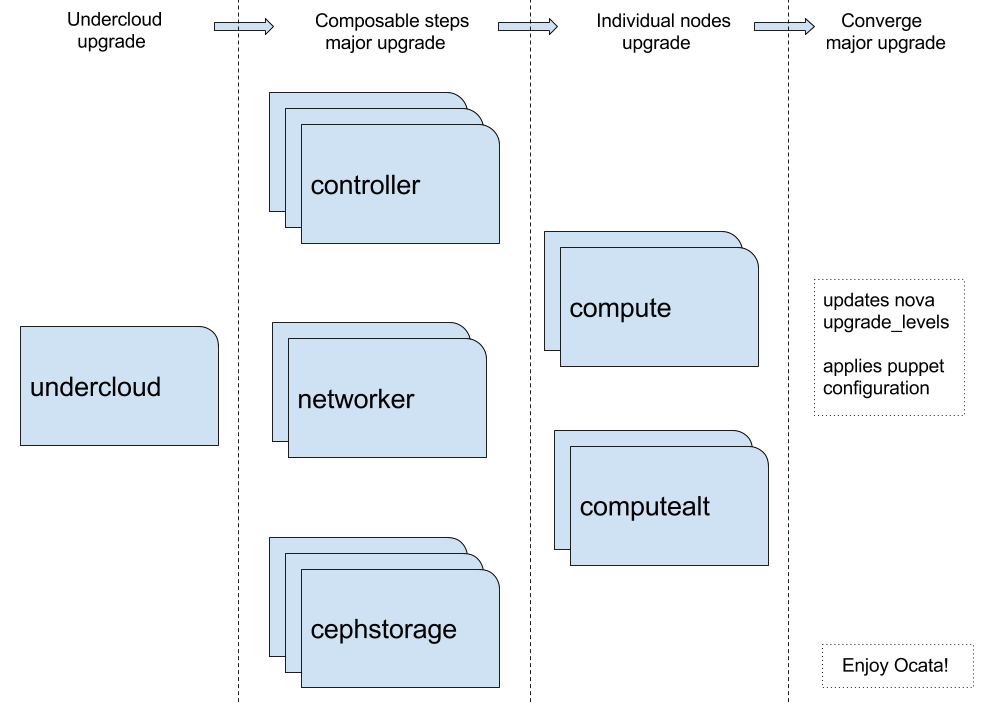 The upgrade process consists of the following main stages:

At this point the undercloud is upgraded and running Ocata.

In Ocata some of the services in roles_data.yaml were deprecated and new ones were introduced. In our case, since we’re using a custom role_data.yaml, we need to manually adjust it to include these changes.

The following services were removed so they need to be removed from roles_data.yaml

The following services were newly introduced and are active by default so they need to be added to roles_data.yaml

In addition there are new services which are not activated by default so they’re not mandatory. I recommend checking the complete list of services in the tripleo-heat-templates roles_data.yaml

While at this step we also want to mark the roles where we want to upgrade individual nodes, in our case the compute nodes. Skipping upgrade for these roles is done via the disable_upgrade_deployment flag and since we have 2 type of compute roles we want to assign this flag to both of them:

During this step services running on all the roles except the ones which were specifically disabled in roles_data are being upgraded.

Individual nodes can be upgraded via the upgrade-non-controller.sh script:

Before upgrading a compute node one might consider to migrate the workloads to another node in order to avoid potential issues which may arise during the upgrade. A reboot is also required in case components such as the kernel or openvswitch get upgraded so once the upgrade is finished it is a proper time for reboot.

Commands that I found useful while migrating workloads:

The openstack unified CLI can output in JSON format which is easy to parse with the help of jq:

Once all the compute nodes have been upgraded we can move forward to the last step in the upgrade process. During previous steps the upgrade_levels configuration section contained ‘compute = auto’ in nova.conf. The converge step removes this option and reapplies the puppet configuration on all overcloud nodes.

At this point the upgrade process is complete and both undercloud and overcloud are running Ocata.

As one last step we want to update the overcloud images so new nodes which are going to be added later to the deployment load the current version images and not the old ones. To do this we should to go to the directory where images have been built/downloaded and run:

Some of the upgraded software components (e.g kernel, openvswitch) require a node reboot to get their new versions loaded. We’re going to take this step to reboot the remaining nodes in the deployment. All the nodes are deployed in an HA topology so we can reboot them one by one so the service availability doesn’t get affected.

We’ll start with the Ceph OSD storage nodes. Before rebooting a node we want to set noout and norebalance flags for the OSDs to avoid rebalancing. Once the node is rebooted we unset the flags, make sure that the cluster is in a HEALTH_OK state and move to the next node in the cluster.

Commands that I found useful while rebooting the Ceph OSD nodes:

Going forward to the networker nodes we can reboot them in a rolling fashion, waiting for the node and its Neutron agents respectively to come back online and then move to the next one. Floating IPs failover will automatically occur when the agent goes down.

Commands that I found useful while rebooting the Networker nodes:

In the last step we’re going to reboot the controller nodes serially, waiting for each node to come back online in the pacemaker cluster and verifying that all pacemaker resources, haproxy backends and Openstack systemd services are running.

Commands that I found useful while rebooting the Controller nodes: