In this post we’ll see how we can quickly get a basic OSPF lab deployed by using Ansible. Our setup consists of 3 x Cisco IOS routers which are connected according to the diagram below. All the routers should already have SSH set up and an interface connected to the management network that will be used for retrieving the configuration files from the server. On the server side we need a Linux machine that has Ansible installed. 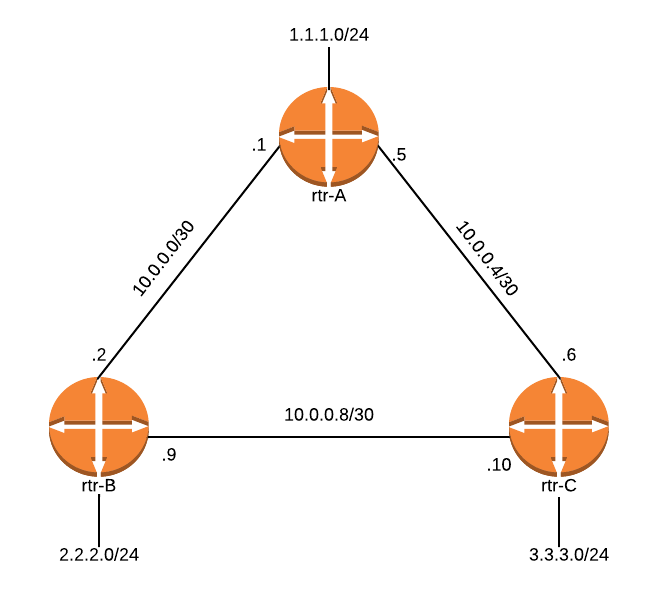 So let’s get started by building the Ansible playbook. I’ll explain the site.yml file below:

Now let’s go through the template files. The config.j2 template is used to build the configuration commands that will be loaded by the routers. What this does is basically loop through the interfaces defined for each of the routers and create the ip address statements for each of them. After this, it generates an entry for the ospf process and creates a network statement if the ‘ospf’ variable is set to yes for a specific interface.

The netmiko.j2 template is just a python script that’s using netmiko to connect to the router, first runs ‘file prompt quiet’ configuration command to disable the save confirmation message. Then it runs the command that’s passed as the 4th argument.

In order to run this we will also need the /etc/ansible/hosts file to contain the localhost hostname. You can find all the files in this GitHub repo: https://github.com/remoteur/ansible-ospflab.git

Once we have all the files in place we can run the playbook by the ‘ansible-playbook site.yml’ command. This is how the output looks like:

This is how one of routers configuration files looks like:

So now we have the lab up and running. Why bother automating this? In the end it’s a basic test environment. Here’s my motivation:

Let me know if you have any questions and I’ll be more than happy to answer. Thanks